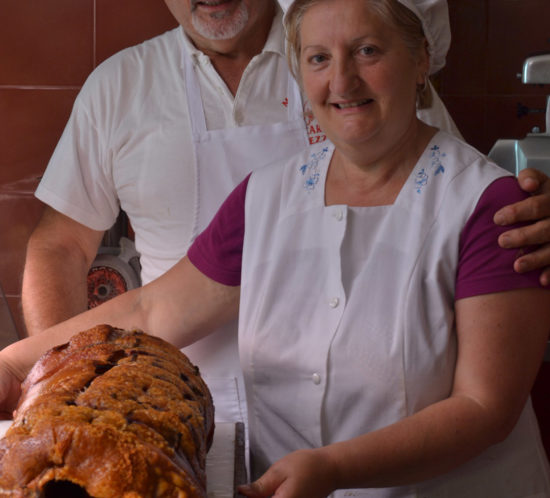 There are few things as irresistible as the aromatic succulence and crackling of porchetta; temptation is never harder than when walking past a porchetta van during a morning market…and succumbing never so sweet…!

Each Friday my cousin Mimina and her husband who own the town’s butcher shop freshly grind their home-grown peperoncini (chili), rosemary and garlic together ready for the town’s weekend porchetta.  They tightly tie the string around the stuffed scored meat to keep the flavours where they should be before cooking it slowly overnight in their gigantic oven. Early in the morning, they pick up the soft potato bread that is traditionally served with porchetta in Prezza, before carrying both into their butcher’s shop, ready to tempt townsfolk to the world’s finest pulled pork.

Outside of a grand family occasion, there aren’t many in Prezza who regularly make their own make their own porchetta.  Although the Abruzzesi are famous for their social and generous eating, they are also keenly frugal too.  They recognise there is little point in keeping an oven lit overnight when porky perfection can be purchased from the local butcher that uses Abruzzo’s acclaimed pork.

Historically Abruzzo’s mountainside communities would invest and work together in raising a pig on the collective scraps from their table; as families became richer there would be a pig raised per each extended family.  This was a true ‘tail to nose’ venture with almost nothing thrown away as the meat was divided into creating the very best sausages, salami and prosciutto that would be air-cured or kept sotto olio (under oil) to sustain entire families throughout the winter.  Abruzzo’s pork remains a highly-prized product; in the province of Chieti there is a whole museum devoted to the pig and the culinary riches it has provided the region, and we in Prezza are forever grateful to Mimina’s family and their legendary Abruzzo porchetta recipe. 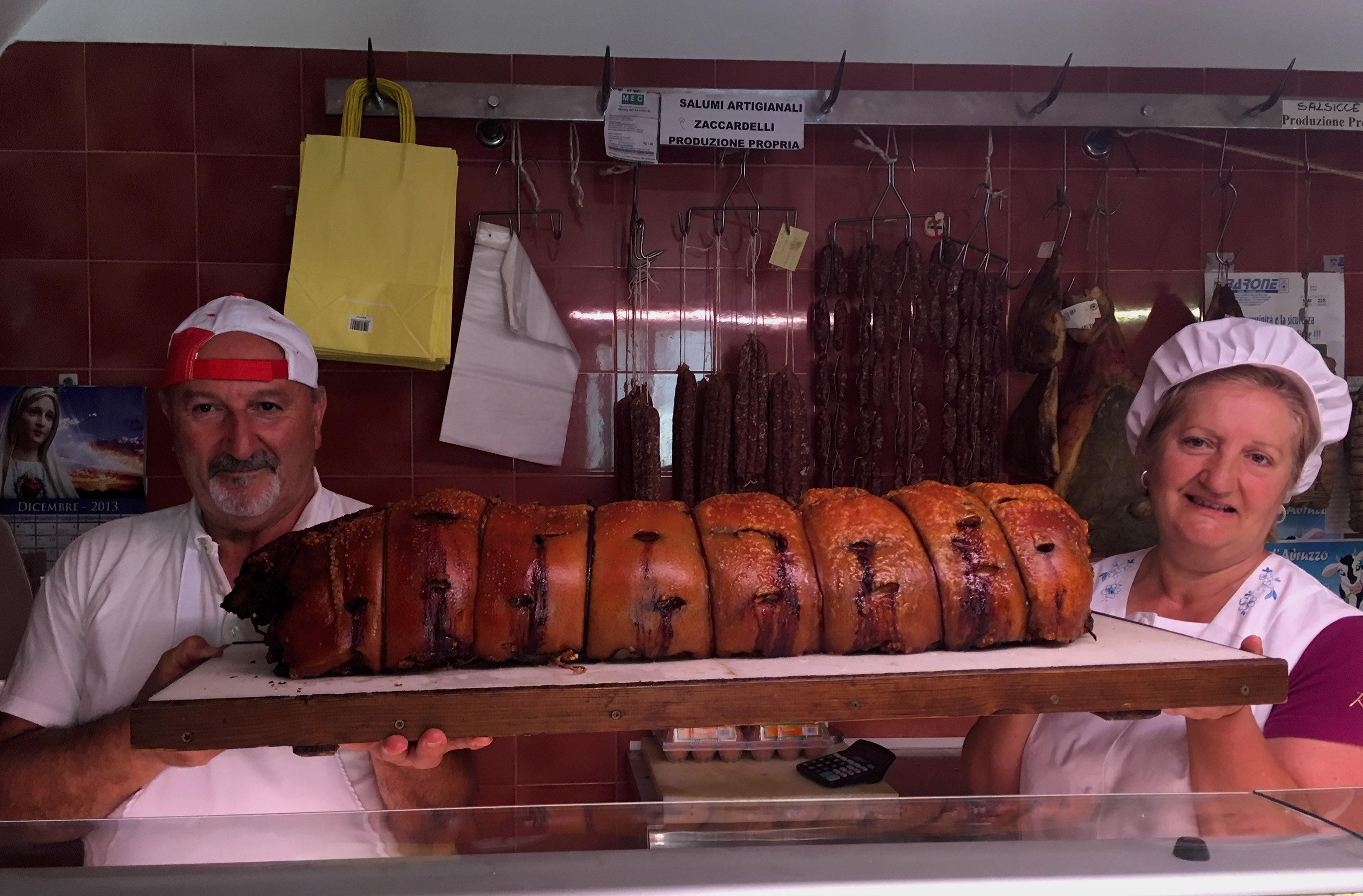 There are few things as irresistible than the aromatic succulence and crackling of porchetta; temptation is never harder... and succumbing is never so sweet...!
Ingredients
Instructions
3.5.3226 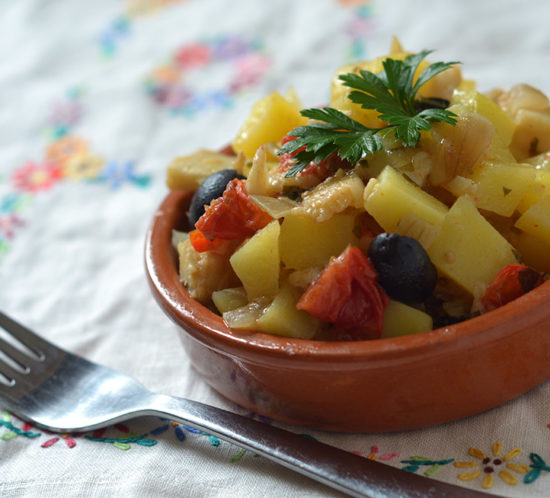 This rustic baccalà (salt cod) dish has remained one of my favourite dishes since I first ate it as a child in Prezza Abruzzo.  Like all chefs I love ingredients which are natural soulmates which potato and baccalà (salt cod) certainly are, whilst the recipe’s other pair, olives and tomatoes add a subtle agro-dolce tang to this 1-pan dish.

In Abruzzo baccalà still, retains its crown as being the most popular  fish eaten across each of the 4 provinces, which is unusual in Italian cooking as it is not a ‘local’ ingredient.  Like most of Italy,  its popularity was established through its salty durability that allowed those living in the mountains a taste of the sea.  Don’t be surprised by some restaurants in Abruzzo who once a week will create a whole menu around their beloved baccalà.   If you join us for an Italian cooking holiday  you can experience how it is served on Abruzzo’s UNESCO protected coastline, when we eat ‘local’ and enjoy a 10-course fish extravaganza aboard a trabocco. 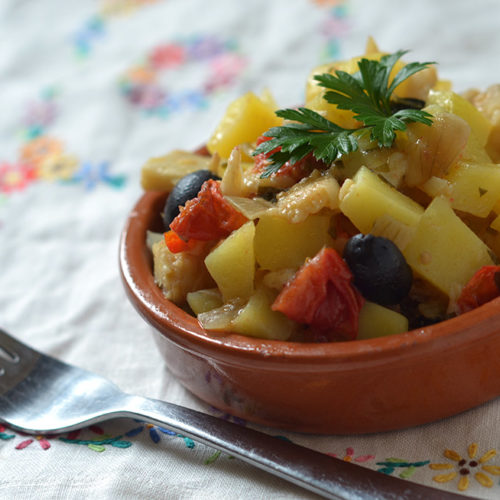 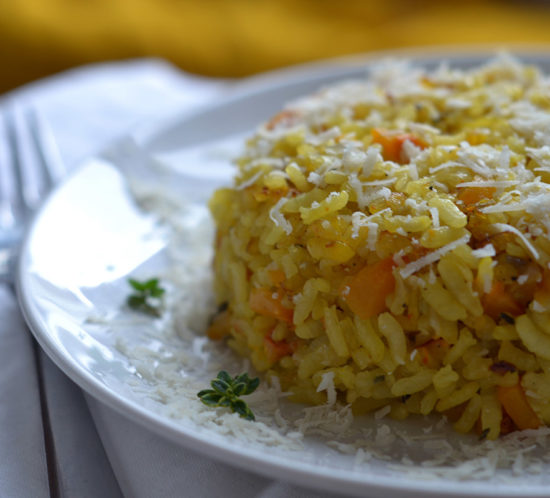 Autumn in my Mother’s house meant squash risotto. She had a preference for the thin-skinned blue zucca (squash) whose vibrant orange flesh mirrored the colours from the first fires of the cool season.  It was the smoky warmth from those fires that eased all our aching muscles on a Sunday night after a hard day spent foraging for mushrooms or helping to harvest olives for friends.

Risotto in Abruzzo is a little different from the better known ones from northern Italy.  Like so much of southern Italian cooking it is without cream instead relying on a flood of sweet flavours from herbs and vegetables.  If your parents had been lucky or were feeling extravagant it may mean your risotto’s top note being one of local Navelli saffron which is regarded as Italy’s best by its most celebrated chefs.

Long ago when my own children were young and we lived in the US, I’d substitute the squash in this baked risotto recipe for pumpkin flesh, pleased that instead of spending time stirring a risotto over a hot stove, I could slip it into the oven and go out with them trick and treating.

Although the more commercial Halloween has arrived in Italy, in Abruzzo there are many people who still prefer to keep local traditions and customs for the more important 1st and 2nd November, All Saints and Day of the Dead.  Instead of concentrating on the wicked it is a time of reflection and remembrance of departed family and friends.  All good Abruzzesi know that way to a spirit’s heart is through their stomach and on November 1st they cook the favourite dishes of their lost loved ones which are left out on ‘la tavola dei morte’ (table of the dead).  As the spirits come back to check on their family they in turn can depart back to their world comforted by the aromas of what was once home and knowing they aren’t forgotten. 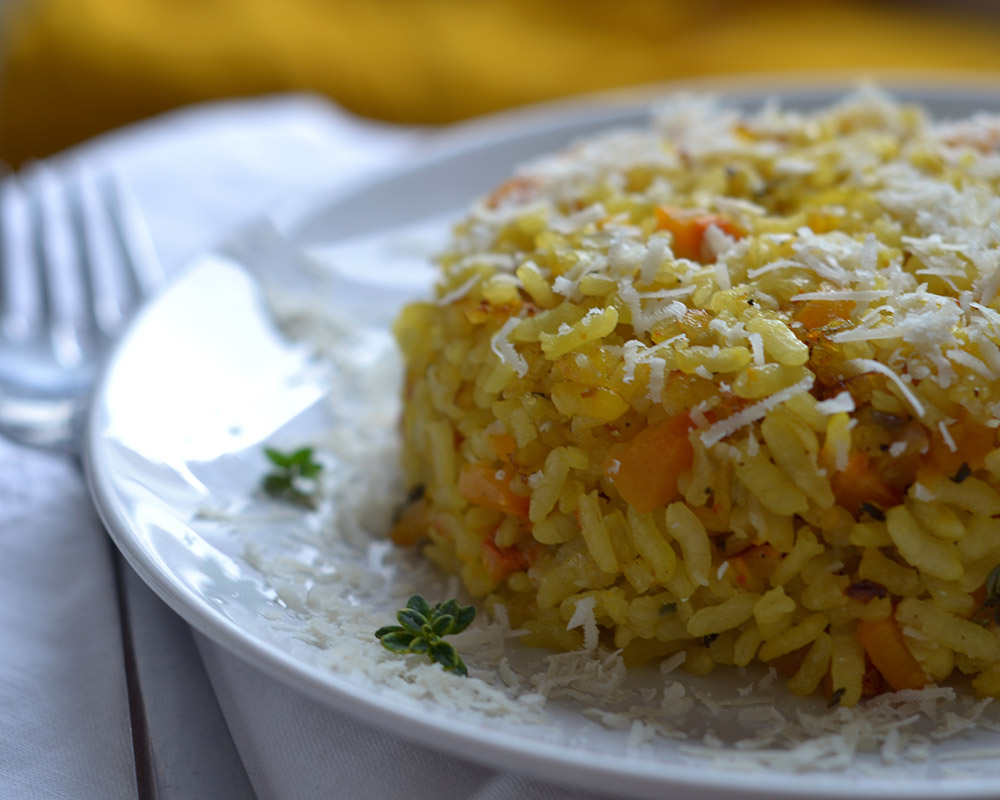 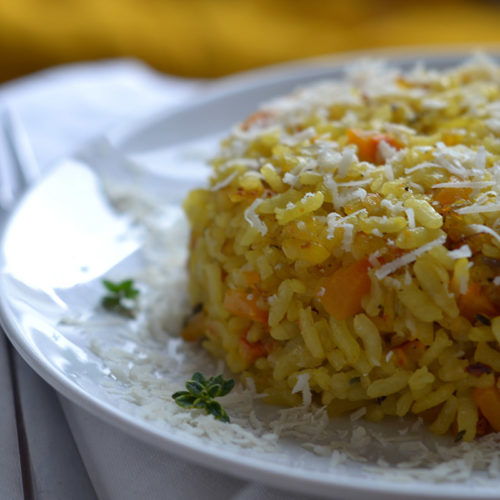